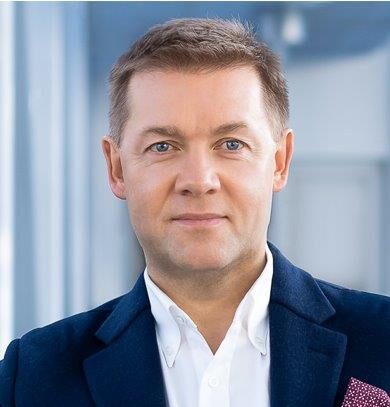 Master’s degree from the University of Economics in Kraków, major in Management and Marketing (1994). A graduate of the University of Copenhagen, major in Business Relations Management (1992). D’Orsay Academy of Gastronomy and Wine 1990. From 1993, he was employed at Elektor Sp. z o.o. in Kraków. From 1994, he was the Regional Manager at REMY COINTREAU GROUP Polska. In 1995, he started working for COLGATE PALMOLIVE Polska, and from 2001 he was the Sales Manager at COLGATE PALMOLIVE Adria a.s. in the Balkans. From 2003, he was employed at Tchibo Polska as the Sales Director in the CEE region. In 2004, he joined SIGMA-KALON DECO Polska Sp. z o.o. as the Commercial Director, and a Member of the Management Board of the Polish company. In 2007, he was appointed a Member of the Management Board of SIGMAKALON Deco Eastern a.s., and later of a part of PPG Europe in Prague where he was responsible for the operation of the commercial teams in Central & Eastern Europe and Africa (EMEA). From May 2008, he was associated with the Capital Group of Synthos S.A. as the Commercial Director, and later a Member of the Management Board responsible for managing the company’s commercial processes around the world. From July 2016, in the rank of Vice President of the Management Board, he was responsible for five business units, marketing and M&A projects. From June 2020, at FTF Columbus as the Managing Partner responsible for the Science and Technology sub-investment fund.